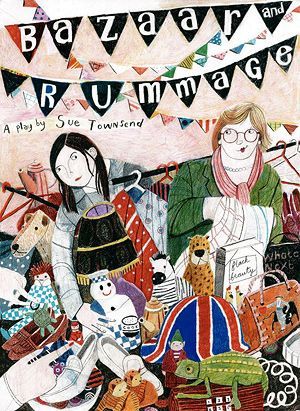 Bazaar and Rummage is a hysterical comedy by Sue Townsend (author of  The Secret Diary of Adrian Mole Aged 13 and 3/4 and The Queen and I) set in a multi-purpose church hall in Acton, West London. Gwenda, a neurotic do-gooder and trainee social worker Fliss, manage to persuade three agoraphobic women: Katrina, an ex-variety songstress, Margaret, a working-class vulgarian and Bell Bell, a women obsessed by cleaning, to venture out of their homes after several years to run a jumble sale.

The director is new member, Richard Haddon.
After 5 years with the National Youth Theatre of Great Britain & drama school, Richard started out as a ‘jobbing’ actor undertaking numerous minor TV & film roles appearing in Eastenders, The Chief, Last Evensong, Allo, Allo! & The Bill, as well as several films including Kenneth Branagh’s Henry V & Provoked. He worked as a letter reader on BBC’s Points of View for nearly two years with Anne Robinson.
He was cast twice to work with Michael Caine – but the scenes were never filmed – ask him for the stories! Around the same time, he began directing plays on the London fringe; Bent by Martin Sherman, Bring Me Sunshine, Bring Me Smiles by C.P. Taylor & Bazaar & Rummage by Sue Townsend – the latter transferring to two hugely successful national tours, the casts staring Lesley Joseph & Jill Gascoine.

As a producer, he has produced national tours of the farce When Did You Last See Your Trousers? with Linda Lusardi, Home Truths with Christopher Cazenove (as executive co-producer), and the premier national tour of The Hitchhiker’s Guide to the Galaxy Radio Show Live! featuring the original Radio 4 cast.

Extensive work in London’s West End in stage management & production including Les Miserables (Queens), The Phantom of the Opera (Her Majesty’s), The King & I (Palladium), Grease (Cambridge), Tommy Steele – What a Show! (Prince of Wales), Royal Variety (Palladium) & Oklahoma! (Lyceum).

Richard toured with the musical Grease to Sweden & Finland, and also has taken a production to the John F. Kennedy Arts Centre, Washington DC, where he received an invitation to visit The White House!

Richard and his partner now run a very successful bakers’ shop called Chicos in Pedreguer. Their shortcrust steak and ale pie alone is worth a visit!!

You can find out more about which cookies we are using or switch them off in settings.

This website uses cookies so that we can provide you with the best user experience possible. Cookie information is stored in your browser and performs functions such as recognising you when you return to our website and helping our team to understand which sections of the website you find most interesting and useful.

Strictly Necessary Cookie should be enabled at all times so that we can save your preferences for cookie settings.

If you disable this cookie, we will not be able to save your preferences. This means that every time you visit this website you will need to enable or disable cookies again.